Standing and Turning with the Apostle John

Subject: Standing and Turning with the Apostle John

Pre-millennial Theologians agree that, historically, John was banished to the Isle of Patmos in the time period of 95–96 AD by the Roman Emperor, Domitian. From the Isle of Patmos, the Apostle John both received and penned “The Vision,” which is the Book of Revelation, from various “vision viewpoints,” as stated in Scripture through the unfolding of the Book of Revelation. In this Pastors’ Page, we will only address the Apostle John’s first, and most important, vision viewpoint.

The Apostle John’s First Vision Viewpoint – “The Lord’s Day,” or the Day of the Lord as the Seventh Day

John’s first vision viewpoint is stated in his own words. He was caught up in the Spirit to the Lord’s Day. This was not Sunday, as the first day of the week, as some postulate. It was, in fact, the Lord’s Day, or the Day of the Lord. This is the time period in which the Lord Jesus Christ bodily returns into the heavens to first judge His Church. Afterward, He will purify the nation of Israel through “Jacob’s Trouble” and judge the world systems through His Revelation to every eye. Christ will finally set up the Messianic Kingdom of God on earth. (See the “The Progressive Coming of the Lord.“)

(Rev 1:7 KJV) “Behold, he cometh with clouds; and every eye shall see him, and they also which pierced him: and all kindreds of the earth shall wail because of him. Even so, Amen.”

The Apostle John Defines His Perspective

(Rev 1:10-12) “I was in the Spirit on the Lord’s Day, and heard behind me a great voice, as of a trumpet, And I turned to see the voice that spake with me. And being turned, I saw seven golden candlesticks;”

In this “Pastors’ Page” we will consider this most important pivotal viewpoint in the “Vision” given to the Apostle John. This viewpoint is clearly preceded by Rev 1:7 “Behold He Cometh!” From thence, John heard behind him a great voice as a trumpet, i.e., a great vibration or shaking. This voice announced Himself as the “Great I Am.” John then turned to see the voice that “spake” and beheld the Son of Man in the midst of the Seven Golden Candlesticks. We believe this first vision viewpoint was on the Lord’s Day, i.e., the Day of the Lord which is synonymous with the Seventh Millennial Day since the creation of Adam and Eve in the Garden of Eden. In Psalms 90:4, and subsequently quoted by the Apostle Peter in II Peter 3:8 “one day is with the Lord as a thousand years.” This Millennial Day Principle is indisputable when compared with the six references to “a thousand years” in Revelation chapter 20. (See “Seven Millennial Days” and “Millennial Day Principle.“)

The Apostle John turned to behold events on the Day of the Lord, even as the day breaks from the East to the West (See Matthew 24:27) 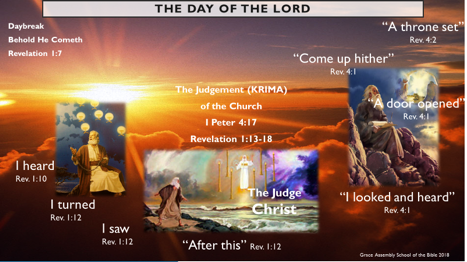 Before elaborating further on our prophetic view of the Apostle John’s First Vision Viewpoint, we will briefly review some of the other traditional viewpoints. These viewpoints are held by respected Church theologians and prophecy teachers who hold to a pre-millennial viewpoint, i.e., that the Church will be “caught up” to meet the Lord in the air prior to the Millennial Reign of Christ.

The Day of the Lord First Breaks in the Heavens

We believe the Day of the Lord, as the Seventh Day, will first break in the heavens, then proceed to break upon the earth. The Lord, as the “Sun of Righteousness” (Mal 4:2) and as “Light Bearer,” in the process of His coming, will usher in the Day of the Lord. Therefore, the Lord’s progressive coming and His presence in the heavens are essential to John declaring he was on the Day of the Lord. His Day is further defined in Matt 24:27 where it is equated with our 24-hour day, beginning with the rising of Him as the “Sun of Righteousness” in the East and setting in the West.

When does the Day of the Lord begin?

We believe this Day of the Lord begins with the Lord’s descension from the Right Hand of the Father where He has been seated as our Great High Priest through the Church Age. (See “1st, 2nd, and 3rd Heavens.“) He will then enter the place of His own throne and glory on the “[recesses] sides of the north,” spanning the Third and Second Heavens. This will require Him to begin with a cleansing of the Second Heavens and the removal of Satan along with his principalities and powers. Having gained a place for His feet in the “midst” of the Churches (Rev 1:13), the Lord will enter His Parousia (Greek -G3952), meaning “His presence,” officially becoming the Judge of His Church, represented by the Seven Churches of Asia.

We again reiterate from the Apostle John’s first “vision viewpoint” that he was already standing on the Day of the Lord in Rev 1:10 and turned to gaze into that Day, beholding “the things that are” which was a nine-fold revelation of the Lord, as Judge of the Church, having returned into the midst of the Churches. (Rev 1:16 KJV) “And he had in his right hand seven stars: and out of his mouth went a sharp twoedged sword: and his countenance was as the sun shineth in his strength.”

The Day of the Lord as synonymous with the coming of the Sun (Son) of Righteousness.

(Mal 4:2 KJV) “But unto you that fear my name shall the Sun of righteousness arise with healing in his wings; and ye shall go forth, and grow up as calves of the stall.”

(Mat 24:27 KJV) “For as the lightning cometh out of the east, and shineth even unto the west; so shall also the coming of the Son of man be.”

A word of explanation of the above verse:

(Mat 24:27) “For as the lightning (astrape, Greek meaning the rising Sun rays, glare and not lightning strike or bolt in this context) cometh out of the east, and shineth even unto the west; so shall also the coming of the Son of man be.”

The Greek word “astrape” is translated “lightning” in the above verse and the context is as the sun rises in the East and sets in the West. This is not describing an erratic lightning bolt but actual light rays from the sun as a light bearer. The same will be true of the coming of the Lord. It will not be a flash or rapid event but rather a progressive dawning of a day. “Bright shining” explains the translation in the King James Version. The Day of the Lord is likened to a 24-hour day that begins with the sun rising in the East and setting in the West. Many prophetic scholars use the word “lightning” to describe the Lord’s coming like a flash of lightning, or as a surprise even to the Living Church in which the Lord will “snatch” them all from the earth. This doctrine is defined in many circles as “the great snatch.” We believe this “great snatch” doctrine will not prove out scripturally or experientially as the Day of the Lord continues to unfold.

A review of the chronology of events according to Rev 1,2, and 3.

The chronology of events begins with the Apostle John, in 95-96 AD, being caught up in Spirit, both his spirit and the Holy Spirit and transported through the Church Age to the Seventh Day, which we believe began to dawn coincidentally or by divine design on our Gentile Calendar in 1995-1996 AD. From thence he views the early breaking of the Day of the Lord and the Day of Christ as follows:

(Rev1:7)“Behold, he cometh (Erchomai) with clouds; and every eye shall see him, and they also which pierced him: and all kindreds of the earth shall wail because of him. Even so, Amen.”

The Apostle John is beholding the progressive returning of the Lord and “Behold, He Cometh!” The verb “cometh” has been explained in preceding paragraphs and is of the present and imperfect tenses, or simply, “happening now but not yet complete.” It means the Lord is on His way but has not yet arrived into the midst of the Churches, according to Rev 1, 2, and 3 or in His Revelation to every eye (Rev 19). He will eventually stand on the Mount of Olives (Zech 14:4).

(Hab 2:3 KJV) “For the vision is yet for an appointed time, but at the end it shall speak, and not lie: though it tarry, wait for it; because it will surely come, it will not tarry.”

(Amos 8:11 KJV) “Behold, the days come, saith the Lord GOD, that I will send a famine in the land, not a famine of bread, nor a thirst for water, but of hearing the words of the LORD:”

As believers open their hearts to the words in II Peter 3:8 that “one day is with the Lord as a thousand years,” they will be able to accept that we are already standing in the Seventh Day, according to our Gentile Calendar. Believers will likewise be able to agree that the Day of the Lord is not possible without the coming and presence of the Lord as the “Sun of Righteousness” present in the heavens. We are standing in a time period where there is no “open vision,” and we will need to accept many things by faith. Therefore, we receive by faith, as revealed by the Holy Spirit, and through the Word of God the progressive coming of the Lord. We will shortly find ourselves, as the Living Church, passing through the judgment of Rev 1, 2, and 3 on the Day of the Lord. Please remember these days of spiritual restoration and divine preparation, will precede the Living Church being caught up to meet the Lord in the air.

(1 Sam 3:1 KJV) “And the child Samuel ministered unto the LORD before Eli. And the word of the LORD was precious in those days; there was no open vision.” 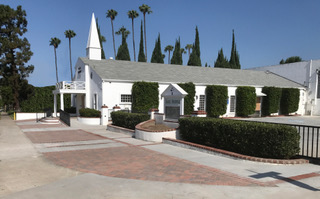